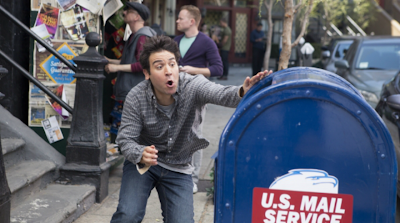 5 second plot:
Episode 4: Barney apparently saw the awkward moment Ted and Robin had when they were looking for the bracelet.
Episode 5: Barney needs to pick a side: his soon-to-be wife or his family.
Episode 6: The reverent dies after hearing how Robin and Barney met.
Episode 7: Everyone tries to prevent Lily from reading the text message that Marshall accepted the judge job.
Episode 8: Robin and her soon to be mother-in-law settle the score.
Episode 9: The story of how Barney met the mom six months ago and she swept him off his feet.
Episode 10: Barney tries to get his mom and dad back together. But instead his mom gets back together with his brother's dad.
Episode 11: Marshall tells stories from the past to get his son to sleep. In ryhmes.
Episode 12: Barney thinks there is a surprise laser tag rehearsal dinner

5 second review: There isn't a lot of new classic comedy stuff happening, now is there? Except for the episode where Walter White makes a cameo (not as WW though). And I do love the way things are set up way ahead. Like the ring-bear. Robin looks extremely pretty, doesn't she?