Star Wars: The Clone Wars Season 4 is filled with disturbances 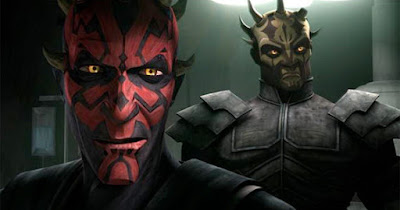 5 second plot: The 4th season starts with a big underwater battle. Then C3PO and R2D2 have some adventures on their own. Followed by a disastrous mission on a dark planet due to a jedi general gone mad. Then slave handlers piss Anakin off. And he even gets more angry when someone kills Obi-Wan. The season ends with Darth Maul and his brother vs Obi-Wan (he's not really dead you know) and Ventress.

5 second review: There's some cool new stuff, awesome warriors, great light-saber fights and space-battles but the best part is seeing Anakin lose it. We all know how where he's headed. Grievous pops up a lot since he's a great villain. Jar Jar is still annoying. And there's a lot of 'I feel a disturbance in the force' going about.