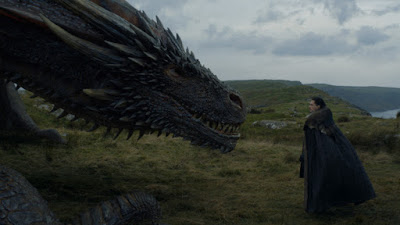 5 second plot: Spoilers ahead! Jaime realizes that it's going to be impossible to win the war. Cersei won't hear of it. Jon wants to show Cersei a zombie to convince her to leave Daenerys alone for a bit so she can help him fight the dead. Tyrion secretly meets with Jaime to talk about it. Jon teams up with a magnificent band of heroes and misfits to go snatch the zombie.

5 second review: There's no big battle in this episode. I was kind of getting used to it. Jon's team has got The Hound in it, the bastard son of king Baratheon, Jorah and the leader of the wildlings. Now that's a team-up! I was thinking about the meeting between Jaime and Tyrion. How did they arrange that? They don't have phones so how in the world did he ring that in?