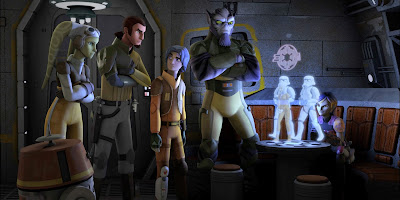 5 second plot: This is the story of a team of rebels that really despises the Empire. They try to save as many people as they can from its clutches. They often have to save each other as well. And they try to hit the Empire where it hurts. The good news is that they’ve got two Jedi in their midst: a master and a padawan. The bad news is that they live in a time when the Empire is very powerful and very evil.

5 second review: Rebels is really for kids. It’s very playful. But if you’re a real Star Wars fan, you won’t mind. And it’s fun. For instance: they steal a TIE fighter and paint it very colorful. But then they need it to get in an enemy battleship unnoticed. With the colorful fighter. They've also got a great droid with an awesome personality. The animation is better than Clone Wars, only the Wookies and Lando (yes! Lando!) look very weird. The last two minutes of the season are very exciting. Ahsoka returns and so does the big guy all dressed in black. What’s his name again? 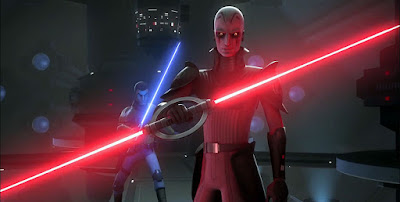